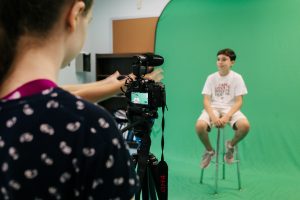 Kids are born with fantastic imaginations. They’re natural storytellers, creative and quirky and, more often than not, quietly brilliant. If given the right tools, kids can create masterpieces.

Contemporary storytelling is increasingly video-focused (just look at your Facebook feed), which leads to an obvious conclusion: kids should learn how to make their own films. Luckily, the technology needed to make a film is more affordable and accessible than ever before.

When kids make their own videos, they tap into their innate talent for building amazing worlds

Kids today are surrounded by videos, and they love them. Any exhausted parent knows how easily an iPad can pacify an over-excited third grader with the bottomless well of on-demand content lurking beneath that lock screen. Videos are an agent of enchantment, and with the wave after wave of YouTube videos and Netflix episodes, often set to “autoplay,” this can lead to a lot of passive consumption.

But when kids make their own videos, instead of watching others’, they tap into their innate talent for building amazing worlds. I often work with budding student filmmakers, and I’ve often marveled at how they fashion new identities for themselves—becoming Mayor Pancake of Food Island, or the sinister shoe-stealing villain, Dr. DeFeet.

Video is widely acknowledged to be an essential tool for sharing ideas and information. Educators around the world use video to teach kids about everything from robots to rainforests. Just like the printed word, video has both a receptive and productive component. When a kid analyzes a TV news clip, it’s like she’s reading the paper. When she films her rebuttal, it’s the equivalent of writing a letter to the editor. If we want kids to be engaged agents of their own learning, teaching them how to make their own films is as essential as teaching them how to spell.

The same skills that are required to write a classic five-paragraph essay can be developed through filmmaking. “The Art of Storytelling,” a popular course offered by Khan Academy, describes the principles behind filmmaking as Film Grammar. The building blocks of a good essay or a good documentary are almost identical: solid research, a well-structured argument, and an insightful conclusion. A video interview is like a trip to the library, a storyboard is like an outline of a rough draft, and the final editing is like… well, editing.

Getting started isn’t always as easy as turning on a camera, but it isn’t particularly difficult either. It just takes some forethought. Here’s how to start bringing film into your classroom:

While kids are often less than enthusiastic about the finer points of MLA citations, they show a surprising zest for all facets of filmmaking. This is because, as natural storytellers, they have an instinctive appreciation for the power of blending images and words. You might look at a picture and see nothing but a sock next to a tree, but a kid might see Samantha van Sock and Tina the Treelady, two best friends who live in a magical forest and solve mysteries together.

The kids of today were born into a digital world, and regardless of our personal feelings about emojis or Snapchat, that world is undeniably a visual one. Nearly two-thirds of young people say GIFs are better than words for conveying emotions, according to a recent survey reported in TIME. The genie is out of the bottle: we have to learn how to live with it.

We can start by being honest with ourselves. We can admit that texting an adorable cat GIF with the words “how are you?” isn’t a sign of the apocalypse, but the 21st century version of passing notes in class. We can accept that kids are going to spend a lot of time with their phones, and realize that they can be encouraged to use that time creating amazing things instead of scrolling mindlessly.